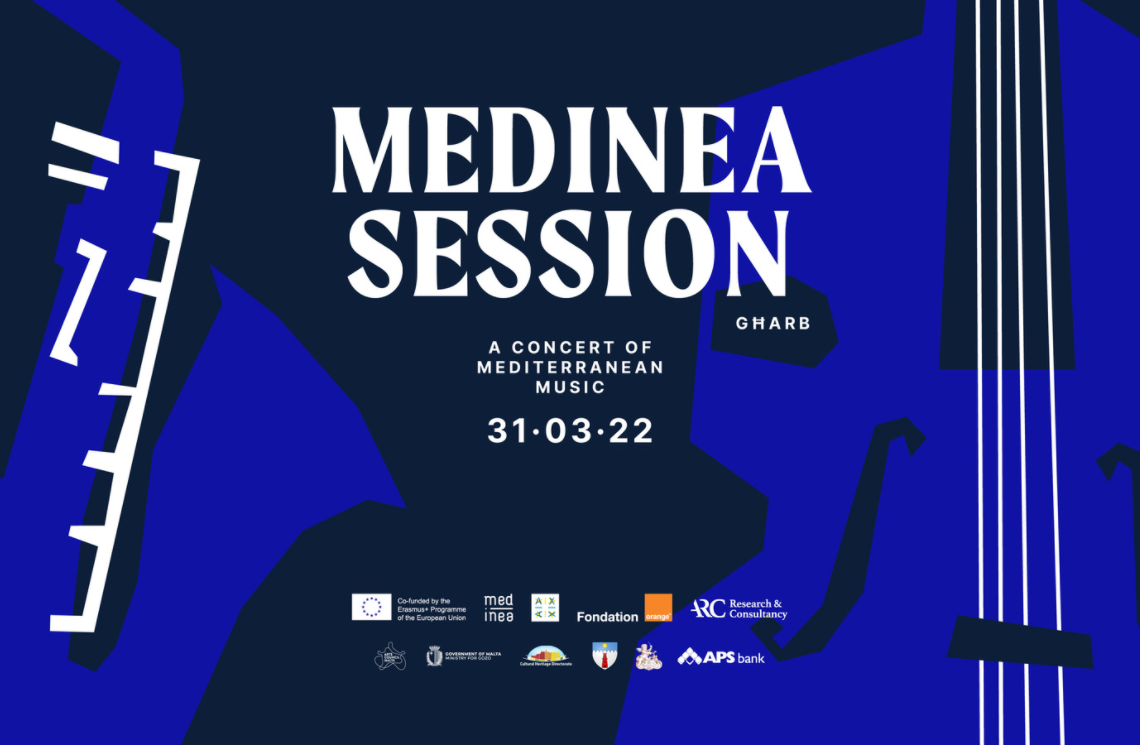 Medinea Session - a music residency and concert of Mediterranean music - at the heart of the local community in Għarb, Gozo

An intercultural creation residency will take place in Għarb, Gozo between the 17th and 31st March 2022. Led by Fabrizio Cassol, nine emerging musicians from the Mediterranean basin will be developing new music under the direction and mentorship of jazz celebrity Fabrizio Cassol. Hailed as one of the top saxophone players in the jazz world, the Belgian jazzman and composer is mostly known for his work with the trio Aka Moon. In recent years, he has been actively advocating intercultural communication through music and has worked incessantly to bring together young musicians coming from different musical backgrounds and traditions.

The participation of the young musicians from France, Greece, Italy, Malta and Tunisia is part of a larger project – the MEDiterranean INcubator for Emerging Artists [Medinea]. The residency is designed to impart a unique artistic experience of innovation and creation that stems through the diversity of musical aesthetics and Mediterranean expressions, and which hosts all styles of music using elements of improvisation, including jazz and traditional music, among others.

At the heart of the community

With the aim of establishing cooperation and relationships with small and local communities, as well as enabling the sharing of European intercultural values, ARC Research and Consultancy (the Medinea partner for Malta) has been working closely with the Ministry of Gozo and Għarb Local Council to develop the project at the heart of the local community. The artistic residency is being hosted at the premises of the Għarb Visitation Band Club, and also includes a number of encounters with local musicians, writers and children.

“This project offers a unique opportunity to witness the diverse musical heri­tage in the Mediterranean basin,” states local partner Davinia Galea. “Especially during these times and within a tense geopolitical context, music offers these young musicians an opportunity to communicate through a common language, together with a master in the field.”

Collaborations with local and international organisations

Local writers Keith Borg, Elena Cardona, Gabriel Lia, and Klara Vassallo merge the Maltese language with Mediterranean music after having been invited to visit and reflect on the musical residency and intercultural compositions emerging from the village of Gharb, Gozo. Their writings will be presented at a reading preceding the concert. This is an initiative of ARC Research & Consultancy in collaboration with Inizjamed, and with the support of APS Bank.

Furthermore, the musicians will be dedicating a final stand-alone piece in solidarity with the ongoing conflict in Ukraine. In collaboration with European Festivals Association and Festivals Malta, we will be collecting donations for UNICEF Ukraine at the door.

The repertoire of music created during this residency will be showcased during a concert in the village of Għarb on March 31. The event will start at 7.30 pm with readings by local writers (through a collaboration with Inizjamed and with the support of APS Bank), and will follow with the concert starting at 8pm. The full event will also be livestreamed on the Facebook page of ARC Research and Consultancy. The event is free of charge. Patrons are asked to book their seat in advance via https://bit.ly/3vTVR7u.

In 2021, only 25% of all applications for Medinea Sessions came from female applicants. Recordings led by women formed only one-fifth of the top 50 albums NPR Music Jazz Critics Poll over 2017 to 2019, and this seems to be a long-term trend: a survey of British jazz musicians in 20014 suggested 14% were female (https://bit.ly/3i3un7j).

In the context of Medinea Session Gozo, this online panel will reflect on realities of gender imbalance in the music world. What is leading to the underrepresentation of women in (jazz) music? How do social behaviours and self confidence impact the participation of women in music? What do consumption patterns tell us and are there any efforts being made to bridge the gap in programming? The panel will discuss challenges, experiences, and sustainable initiatives.